The town of Sabinov lies on the water meadow of the Torysa River at an altitude of 324 meters above sea level surrounded by the easternmost outcrop of Bachureň Mountains and the Čergov Mountain range.

The first written mention of Sabinov as a considerably developed royal village is from 1248. Its inhabitants were mainly engaged in farming, and only later the craft production began to develop. An important milestone in its further development was on January 28, 1299, when the King Andrew III. of Hungary granted Sabinov (together with Prešov and Veľký Šariš) Spiš rights – the right to elect its mayor and pastor, the right to a court, hunting and fishing, exemption from taxes, tolls, customs duties and military service. Since that day, the legal status of Sabinov has changed and it became a town. In 1405, Sabinov was promoted to a royal free city, which brought him a number of other privileges.
Crafts are developing and trade is booming. At the end of the 15th century, Sabinov became a member of Pentopolitana – an association of five Eastern Slovak towns, which also included Košice, Prešov, Bardejov and Levoča. Period from 16th to 18th century was marked by prosperity, later however by the economic decline of the town. In the 19th century, Sabinov was a small provincial town with poorly developed industrial production. Even in the years of the First Czechoslovak Republic, economic development continued to lag behind. Of the larger companies, there was a sawmill, a tannery and a cannery. The population was mostly engaged in agriculture, which was at a poor level. The construction development of Sabinov with a typical medieval lenticular square began with the reconstruction of the originally agrarian settlement. The oldest preserved buildings date from the end of the 14th century.

The most important and at the same time the oldest architectural monument is the Gothic church dedicated to St. John the Baptist. The original church burned down completely in 1461, the fire melted the bells, as well. In the years 1484-1518, the late Gothic church was rebuilt. The interior decoration of the church is in Gothic, Renaissance and Baroque style. The most valuable is the main altar. Its original is located in the National Museum in Budapest and comes from the workshop of Master Paul of Levoča. The church was damaged by fire several times. The last major modifications were made in 1938-1939; in the 1970s the main altar was restored. In 1992, a total external reconstruction was carried out. The bell tower at the church belonging to the so-called Eastern Slovak Renaissance was completed in 1657, the bell dates back to 1470.

Another building landmark of the historic centre of the town is the former lycée built in the Renaissance style in 1530, rebuilt in the 18th century. The building panorama of Sabinov is supplemented by a Greek-Catholic church, two evangelical churches and an Orthodox temple built on the margins of the historical centre.

Sabinov had a Slovak population only until the mid-13th century, when German immigrants settled here. The evidence of the number of new settlers can be confirmed by the data from the 14th to 16th centuries, when both nationalities had their own Protestant churches and preachers.

During the Reformation period, Sabinov was known for its education, several excellent teachers here applied state-of-the-art methods of education. Since October 1740 there was a Piarist grammar school in Sabinov, which relocated into its own building of today’s museum in 1784. In the years 1867 – 1877, the important figure in the Slovak National Revival Movement Bohuslav Nosák-Nezabudov lived in the town with his brother, the progressive teacher Samuel Fábry and the Slovak poet Ján Cuker were also active here. In the period after the First World War, the visual artists Bandy Cirbus and Ernest Stenhura, and the writers Jolana Cirbusová and Anton Prídavok lived and worked here. Later, various cultural circles and organizations were established in the city. In the years 1922 – 1924, the Palárik theatre circle successfully worked under the direction of Janko Borodáč, who worked in Sabinov as a teacher.

The life of the city, as well as the life of the whole Europe, was marked in the first half of the century by the world economic crisis, which resulted in the World War II. The hardships of the crisis also affected the people in Sabinov. Most of the Jews, many of whom were in Sabinov at that time, were taken to the infamous concentration camps, of which very few returned. In January 1945, the town was liberated by the rapid advance of the Red Army troops from Dukla Pass through Prešov and Bardejov to the west.

Today’s Sabinov is a promising city with more than 12,000 inhabitants, who find all the necessary facilities and services. The rich cultural life of the city is developed by the Cultural and Social Centre. His folklore ensemble Sabinovčan, a participant in several foreign festivals, children’s ensemble Sabiník and wind music Sabinka represent Sabinov far beyond the city borders. The aesthetic feeling and artistic education of the youth is developed by the extracurricular Primary School of Arts with several departments. One of the unusual sights that the visitors of Sabinov may experience is a walk through its historic centre – the square and the romantic side alleys, where there are bastions and walls of the former fortifications of the city, highlighting its medieval glory. Walks to the Švabľovka forest park, where the facility for treating rheumatic and skin diseases once were, are extremely beautiful. For tourists, there are marked trails in the surrounding Čergov mountains and Bachureň Mountains with beautiful natural scenery and the ruins of Hanigovsý hrad Castle. The most important recreation centre Drienica – Lysá is located close to the city and is also a great place for winter hiking and skiing.

In 2016, the city received an award for its initiative in Jewish affairs. 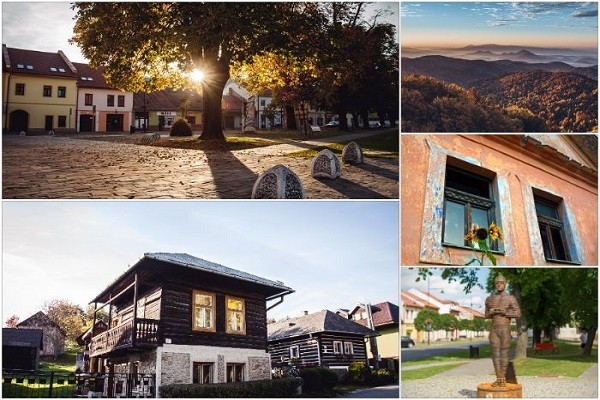