The district town of Svidník lies in the northern part of the Low Beskids, on the water meadow terrace at the river mouth of the Ladomirka River into the Ondava River at an altitude of about 230 m. The village was founded in 1944 by the merger of two municipalities – Nižný Svidník, situated on the left bank of Ladomirka River, and Vyšný Svidník, situated on the right bank of Ondava River. Traces of the settlement of Svidník and its surroundings are already evident in prehistory. The finds of mammoth tusks and teeth, and a stone axe head from the Early Stone Age are a proof of this settlement. The greatest evidence is the silver denarius from the time of Emperor Marcus Aurelius (reign: 161-180), which proves the existence of an ancient Amber Road passing through Svidník. The advantage of the location, name and position of Svidník in the early Middle Ages and the first reports about the surrounding villages in the Upper Ondava River as well as the existence of a medieval fort on the nearby Kaštielik hill (328 m) mean that the process of permanent settlement of the region and Svidník itself began before 13th century. The wider area around today’s district town of Svidník belonged to the feudal lord Aba before the middle of the 13th century. In 1269, Štefan’s son, the count Šimon from the count Pud, son of Artolf of the Clan Aba, bought the land of Smilno for 30 marks. Its borders extended in the east to the Chotčianka River. At that time, the territory of Stročín also belonged to the land of Smilno. In 1317, Stročín is mentioned as a developing village where toll was collected. In the same year, the Hungarian king Charles Robert confiscated the property of another feudal lord Peter Peteň, who also owned the territory of Stročín, and donated them to Master Miček, the son of Michal, count and castle manager at Šariš Castle. The last third of the 13th century and the first half of the 14th century were quite eventful, when it comes to the ownership also in the territory of what now is known as Svidník. The first written report directly concerning Svidník is in the document of the Eger Chapter of June 28, 1355, where Svidník is listed as “Scyuidnyk”.  The mentioned confluence, the estuary of Ladomírka and Ondava Rivers, geographically and hydrologically conditioned that the original Svidník arose as the mentioned two villages – Nižný Svidník and Vyšný Svidník. Here, two settlers (equivalent of today’s mayor) brought the original new inhabitants at that time, who were using the right of purchase, to two villages. At the beginning of the 15th century, there were already two housing estates. In 1414 and 1416 they are referred to as “Possessiones … Zuydnegh et alteram Zuydnegh”. The new population was the vast majority of Ruthenian nationality and the Eastern Church. There was already a parish here.

The location of Svidník and its surroundings in the border area was the reason why its population often found itself in a whirlwind of turning events. The mostly peaceful Dukla Pass, which served as a trade transit, sometimes showed an averted face. Military vehicles with weapons and troops passed along its paths. In the spring of 1799, Russian troops under General G. L. Rebinder passed through Svidník to northern Italy. In March 1800, they were the Cossacks of Suvorov’s army, and as a memorial plaque on the building where the state administration offices are located, in 1806, General Kutuzov’s troops stayed in the village. The 19th century was very cruel to the local population. After barren years, cholera broke out. Unfavourable economic conditions and poverty were the main causes of mass emigration to the Lower Land (southern region of the Kingdom of Hungary) and overseas in the last third of the 19th century. The situation worsened during the First World War, when the retreating units of the Imperial-Royal Army set Svidník on fire. After the First World War, Svidník and the surrounding villages were among the poorest ones in the Czechoslovak Republic. Basketry, door-to-door sale and other small activities were not enough as a source of livelihood. Svidník and its surroundings were engulfed in another emigrant fever. However, the proverbial poverty, backwardness and famine accompanied the population of this region until the end of World War II. Not every village or town was hit by as many horrors of war during the two world wars as it did Svidník. Dukla and the town of Svidník itself have become a permanent symbol of the Second World War victims.  The Memorial of the Soviet Army and the Military Museum in Svidník with the extensive natural area of the Memorial of the Czechoslovak Army in Dukla, a national cultural monument, commemorates the historical battles from the end of the Second World War.

Traditions and culture are represented by two festivals. Ruthenian Festival and Cultural Festival of Ruthenians-Ukrainians of Slovakia (held in the local amphitheatre since 1956). During the year, several traditional events take place in Svidník, which already have a stable place in the calendar: Anniversary of Liberation of Svidník, Women’s Day, Teachers’ Day, Mother’s Day, Days of Svidník, Dukla Peace Run, and October-month of respect for the elderly, Echo of our festivities, Pre-Christmas markets, Christmas concerts, Christmas markets and New Year’s Eve.
Fans of sports will be delighted by two tennis courts in Svidník, the summer swimming pool Vodný svet, , which also has a new Aquaruthenia spa  in its area. There is a growing interest in running among people, the traditional Dukla Peace Run (the fourth oldest run in Slovakia) has more participants from year to year. The city has 21 sports venues, a sports hall with a bowling alley and children’s playgrounds are constantly expanding and modernizing. In Svidník there are sports clubs for volleyball and football, and the popularity and success in recent years has also been recorded in hockey, chess, table tennis and karate. Artistic groups are extremely successful. The folklore ensemble Makovica, the children’s ensemble Makovička, the dance club Svitan and the Primary Art School in Svidník also performs its talents at city and other major events.
The town of Svidník has a strong tradition in the cultivation of folk traditions, which is significantly supported by Podduklianske osvetové stredisko education centre, the SNM – Museum of Ukrainian Culture and Poddukianska knižnica library. Beekeeping, basketry, tinkers work, carving and pottery have a long tradition on this territory. 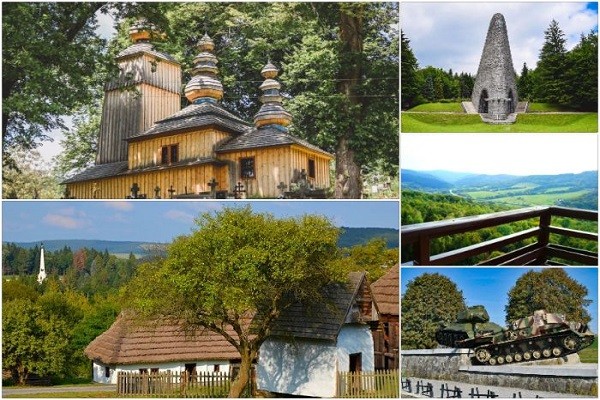